For every woman, diamonds are a dream because they are precious and give her gorgeous beauty. Every woman wants a diamond, and  Swa Diamonds believe it is a privilege to give her the best quality diamond at an affordable price range. Diamonds are being made available to women in rural India through exclusive SWA outlets in tier one cities and SWA shop-in-shop outlets in tier two and tier three cities. Swa Diamonds was launched during the pandemic, but that never hindered their success. More than 150 Swa outlets have been opened across South India, and a manufacturing plant is under construction in Mumbai. South Indians are not interested in entering the diamond business due to their lack of knowledge of the process of creating diamond ornaments. North Indians, on the other hand, are experts in the diamond business. Abdul Gafur Anadiyan, the managing director of Swa Diamonds, was willing to take the risk and launched the brand in November 2019. Swa Diamonds is his dream to become a diamond brand and mark a position on the map of the diamond industry. Now Swa Diamonds stands up the world with the Guinness record for most diamonds sets in one ring is 24679 conflict free natural diamonds.

Abdul Gafur Anadiyan, the managing director of Swa diamonds, considered the Guinness achievement and studied it thoroughly. Consequently, he hired a jewellery designer from an accredited and efficient college such as NID or NIFT. After interviewing several jewelery designers, he selected Rijisha TV, who is a post-graduate from the National Institute of Design (NID) in Lifestyle Accessory Design. During the interview, the idea of attempting the Guinness world record was discussed and he asked her to submit the concept with a deadline. As a result, three different concepts were presented here from which one was selected. The MD was so impressed with her design concept that he decided to proceed with the Guinness project with the fresher designer. One of the most fascinating things about this project is that the jewellery designer is a fresher, having just graduated from NID, This shows the confidence of the SWA team to carry out any project regardless of the complications that it has in their way, MD was confident enough that the project can be perfectly executed by the designer and the production under his guidance to fulfill his dream. A well planned schedule was created by the team to execute the project. 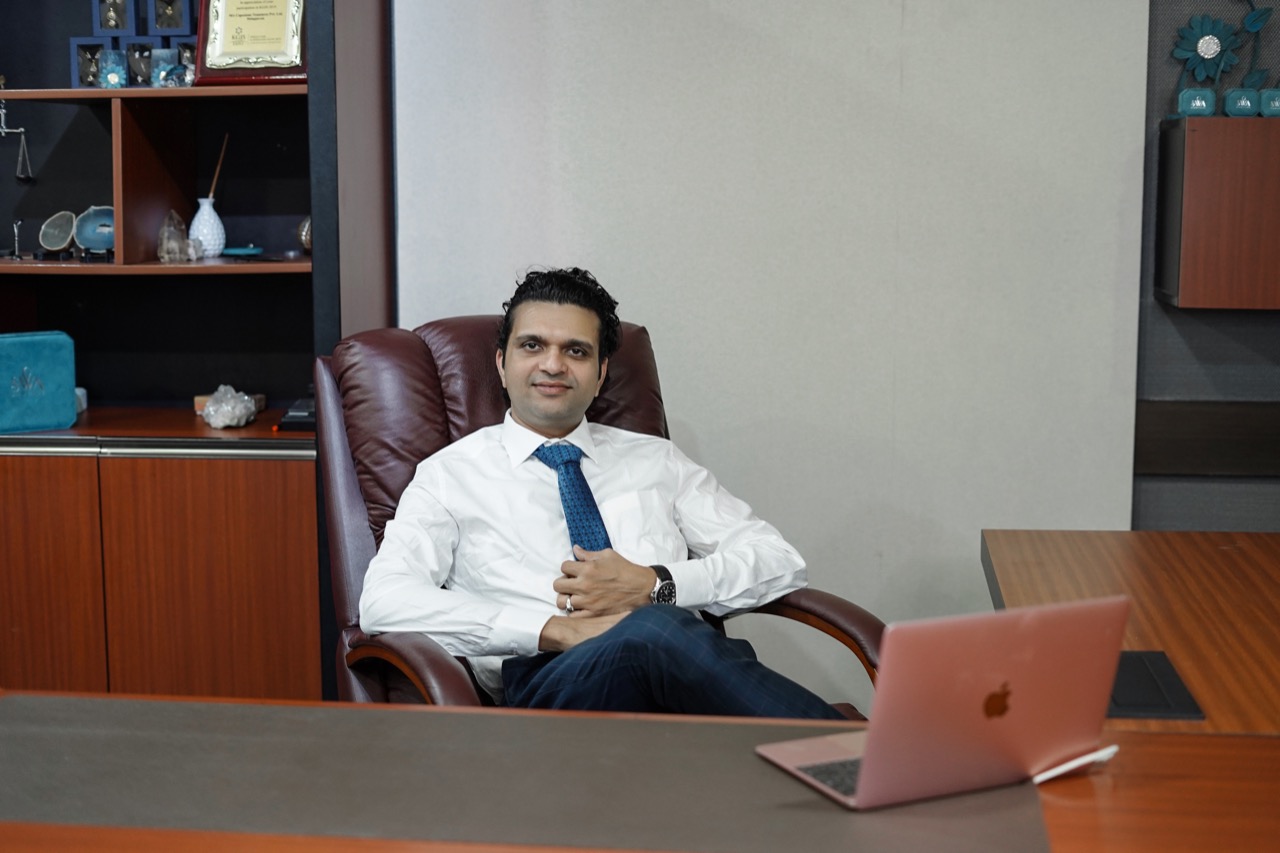 As part of breaking the Guinness World Record, Swa Diamonds also intends to convey a message through this attempt. When Swa thought about breaking the existing Guinness Record, it decided to design a product that would be different and also informative, and that was how 'Ami' was born. During the design process of the Guinness ring, the designer wanted to do something different.  As a result, she came up with the concept of the 'Touch of Ami', Inspired by the pink oyster mushrooms in 15 days. MD gave approval for the concept. In the literal meaning of the word Ami, it means "immortality."  She was a perfect choice because her mushroom concept demonstrates her brilliance. Women love jewellery, but there are very few women who enter the jewellery making and designing fields. Yet it is astonishing that so few girls choose to pursue careers in this field. Here's where Rijisha TV stands out, she has made a career out of her own interests and talent. Her skills in jewellery making from heredity gave her twice the confidence to pursue this career. It gives us great pride to know that one of the Guinness World Records that the world watches has a female presence behind it. The girls should take inspiration from this. She received the post of the chief diamond designer as a gift from SWA Diamonds after they were impressed by her ring. Kerala lacks a design oriented approach towards jewellery and hence that affects the opportunities and experience for a jewellery designer in this state. Rijisha perhaps will be the first one in the state who got the best designation in this field right after her college days.

When the designer was assigned to the project, the input data was a ring of 20k stones. Hence the form inspiration must be of a larger surface area where they can include the maximum number of natural diamonds. The research led to Pink oyster mushrooms with beautiful layering and gorgeous curves.

Mushrooms were earlier only used by the royalties, who believed mushrooms were the key to immortality due to their medicinal properties. Hence the representations come as royalty, immortality, and longevity. This story led to the ring's name, “The touch of Ami”. Ami means immortality. The concept of the name is that the ring wishes a touch of immortality to the wearer.

Through the selection of the form inspiration, the ring is also sending a message to its audience. Mushrooms can be of different shapes and colours. Some are edible, and some are not. Mushrooms are highly nutritional and have ecological, economic, and environmental values. Yet, mushrooms are considered an object associated with disgust and poison or an object associated with witchcraft because some species are poisonous. But both poisonous and edible mushrooms have their purpose in the ecosystem to create a balance.

Every possible living being on earth is born with a purpose. From the minute ones to the gigantic whales, every life has its purpose. Let’s embrace the idea of inclusivity by understanding the concept that every life form on earth is vital for a peaceful future ahead.

Swa diamonds broke the record for the most diamonds set in one ring with 24679, breaking the previous record of 12638 within a short period of time. The entire production process of this huge project just took six months to complete with the help of five efficient teams. The efficient coordination and communication within the team played a vital role along with the astonishing talents of every member of the team, in completing the project. The team behind the big Success is as follows

The core managing team of SWA diamonds came together to lay the first brick for the idea of the Guinness world record. The entire application and certification process was done with ease by them. The entire process was monitored and guided by the Managing Director of Swa Diamonds right from application till the final step in this project

The basic stone of Guinness work and design concept is done by the Jewellery Designer Rijisha TV. She completed the design concept and manual design in a short time. Actually, the design concept was the selection criteria while interviewing, and her talent and creativity showed in the mushroom concept that was impressed by Swa Diamonds Authority, which is the beginning of the making of Ami. 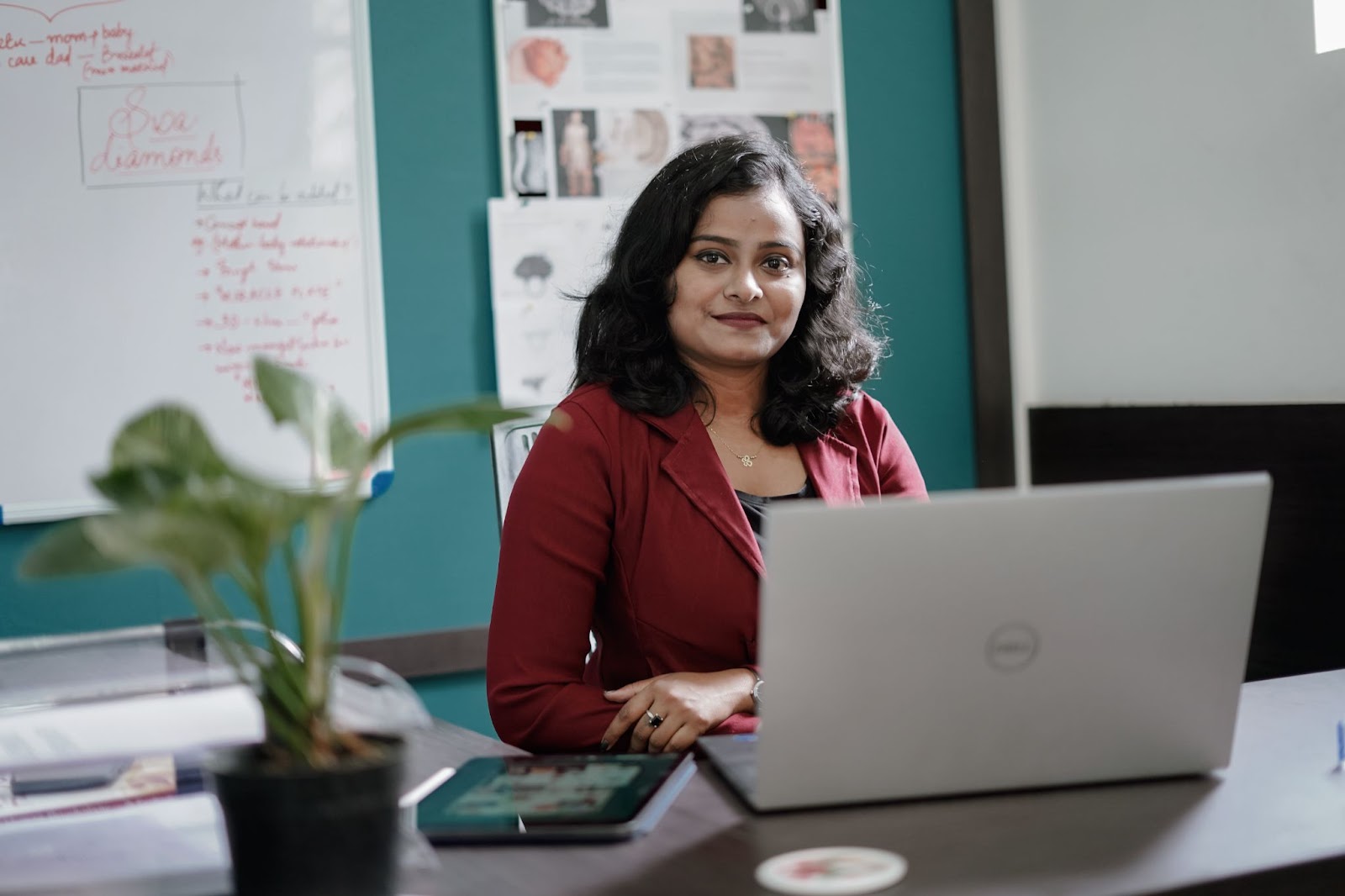 After confirming the technicalities of the design, CAD design and 3D printing were started. This was a tedious task since digitalizing the curves in a single petal took hours to complete and the design consist of 41 unique petals with a shank and the plate that hold the petals. Placing the prongs for the diamonds itself was a task while digitalizing it. Multiple explorations were done during this process in placing the stones and petals. The loading time for each petal in the software itself took a number of hours. 3D CAD is perfectly and patiently done by Amit Bodak who is the expert CAD designer at Swa  Diamonds with 8 years of experience. After completing CAD that was going to the production section, this takes more time because the formation happens through this. When the ring is completed, then for the certification process video and other digital renders were managed by the talented graphic designers  Afsal AT and, Hashin Veeran from Swa  Diamonds.

The formation of the Guinness ring goes through different steps such as Waxing, casting, cleaning, and polishing. These procedures are under the control of Faruk Mondal and Mangal Dhara, who are diamond experts of  Swa Diamonds. Made a Wax model of ‘Ami’ using that mold, and eventually end up with a physical reproduction of the final product. Converting the wax tree mold to Gold tree, then separating the elements from it and filed the excess pieces from the elements, cleaning each part using the chemicals.

The process of fitting gemstones into finished pieces of jewellery was another stunning sight. Manually set the 24,679 stones perfectly done by Masud Ali Gzi and his team, who is one of the diamond experts of  Swa diamonds. This was the finishing stage of the production of ‘Ami’. Last, cleaned and polished the product and then assembled each part that formed the dazzling ring, six months' effort makes the dream come true.  At last on may 5th 2022  ‘the touch of Ami’ got the Guinness World record and Asian Book of Records,  The production cost of the product alone is almost 1 crore

Currently, the diamond market is dominated by certain giants like Belgium and Surat, and Swa Diamonds hope to make Kerala a part of that group by showcasing the immense talents that we possess. During the past three years, Swa Diamonds' growth has been remarkable and unpredictable; the Guinness ring 'Touch of Ami' has fueled Swa Diamonds' growth. Swa Diamonds is the parent company of Capestone. The concept of SWA Diamonds was born from CAPESTONE Ventures Pvt Ltd, a prominent wholesale diamond jeweler that businesses with prominent retail jewelry stores. Diamond quality checks and diamond jewellery buying and selling are difficult due to a lack of knowledge and experience. As a result, Abdul Gafur Anadiyan studied diamond ornaments and the diamond market well before setting up Swa Diamonds to ease the business of diamonds and platinum jewellery. The Touch of Ami also represents the triumph of entrepreneurship in the diamond sector of our state.

With Abdul Gafur Anadian, Managing Director of Swa Diamonds in November 2019, there is a story of friendship behind the establishment of a diamond manufacturing company. A friendly conversation led to the creation of Swa Diamonds. As a result, a group of friends entered the diamond market. The decision did not guarantee 100 percent success, but there were more failures than successes. People are surprised that even the Corona period could not slow down the company's growth. In spite of so many difficulties, Swa Diamonds moved forward rapidly only with the support of great power. The foundation of Swa Diamonds is Capstone Ventures, which has two decades of experience in the field of gold manufacturing business. If the foundation is strong, then there is no need to look again! Along with that, when he became a strategic managing director to lead each step forward with careful and accurate planning, Swa Diamonds acquired Guinness. Swa Diamonds now aims to become a diamond brand that captures the world's attention in the diamond market and this Guinness world record achievement will just be the beginning of the remarkable journey that we have planned ahead.